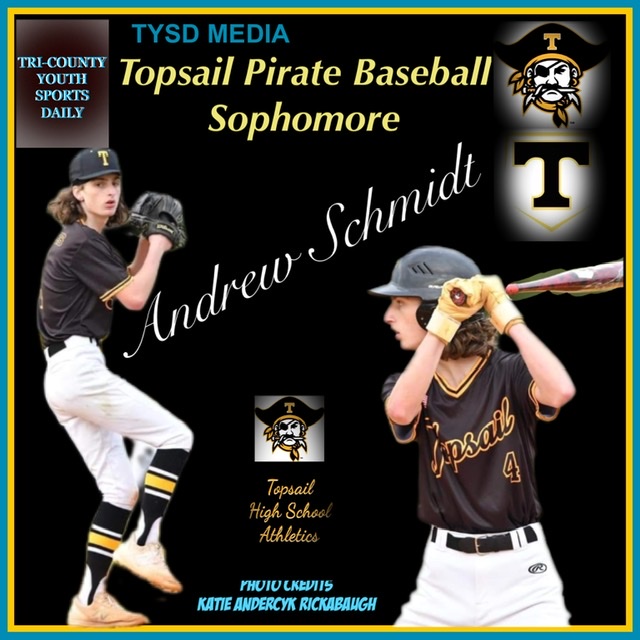 Youth, Middle school, and High school sports have changed from many years ago. Not, the sport themselves, but the approach and atmosphere for young athletes as they begin their sports interest as young as four years old. Many years ago, a kid was 9 years old before he was able to play an organized sport. Youth Baseball followed up with T-Ball, Machine Pitch, and Coach Pitch for the younger ages. Kids should play multiple sports at a young age. With that said, it is much different today, the days of putting the baseball bat and glove away until next season are no more. Even if a kid plays other sports, have to continue to work on their baseball skills in the off season.

Topsail High School sophomore Andrew Schmidt, a baseball player for the Pirates. Andrew started playing baseball at the age of four years old for Scotch Plains-Fanwood Recreational League in New Jersey where the family lived. Andrew and his family moved to Hampstead NC and he played with the Topsail Ball Club and later Supper Optimist Baseball in Wilmington NC.

Andrew Schmidt in his sophomore season for the Pirates hopes to improve on his freshman season for Topsail Baseball. Schmidt plays multiple positions on the field, with pitcher being his focus position. As a freshman on the mound for the Junior Varsity Pirates, Andrew finished the season with a 2-0 record , which included a no hitter, 14 strike victory over Trask High School. Schmidt closed out his freshman season with a victory on the mound over Ashley High School, giving up 3 hits. Last summer after high school season Andrew played his first season with the Hampstead Post 167 American Legion Team.

Andrew hopes to continue as student athlete and baseball career in college after high school.

Schmidt has the work ethic and commitment to the sport of baseball to make that happen.