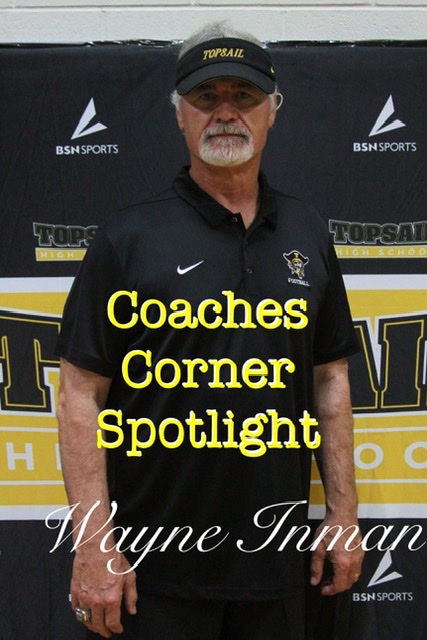 Topsail Youth Sports Daily new feature “COACHES CORNER SPOTLIGHT” is here. The feature is a way to introduce some of our fine coaches in our area. The feature will include Youth/Recreation, Middle School and High School.

Yes, sports are competitive and as a coach you do your best to put your team in a position to win. With that said,  When the kids you coach become adults they will not remember you for the games their team won. They will remember the impact you had on their lives as their coach. I find the quote “ A COACHE’S VALUE IS NOT FOUND IN THEIR WON-LOSS RECORD OR THEIR RESUME AS A COACH BUT WITH THE (IMPACT) MADE IN THEIR PLAYERS LIVES” to be very true.

Topsail Head Football Coach Wayne Inman, a  veteran high school coach has made a impact on many student athletes in his career. Inman a 1980 graduate of East Carolina University. As football player for the Pirates Inman’s accomplishment on the field included Third Team All-All American his junior season and in year 2000 inducted to the ECU “Hall of Fame”. After many years of coaching in Fayetteville NC area Inman was named to head the Topsail High School  football program in 2013. Inman faced the task of transition of the football program from a 2A NCHSAA Classification to a 3A competing in the Mideastern 3A/4A Conference. With Coach Inman’s puts emphasis on making sure the players had the tools they needed to be successful. A new weight room and a upgrade in the equipment and facilities. In 2019 the Topsail football program had over 100 players . On the field the Pirates last two seasons have been the the best in school history.

Inman’s impact and influence on his players if far reaching. His sons Daniel and Kevin both played college football and currently are both high school coaches. Coach Inman has impacted the lives of many of his players over the years. He communicates with many on a frequent basis.

Coach Inman enjoys the relationship with his former players. “It’s a unique part of being a coach. An awesome opportunity to be able to reach young people and make a difference in their lives”, said Inman.  “I have some to continue their career in college and professional football. Many are Doctors, Lawyers and other professional careers. I still today hear from many of them”