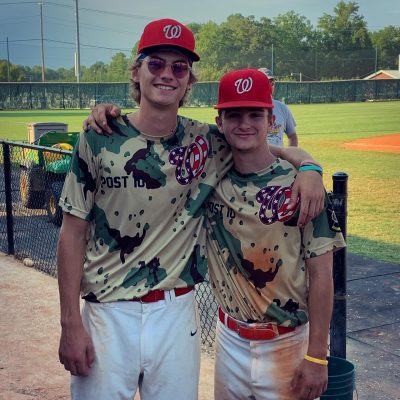 It has been a very successful season for the Wilmington Post 10 American Legion baseball team this summer. The team is composed of players from all the high schools in the area. Also included are college players from last years team that meet the eligibility requirements.

Topsail Pirate baseball graduates Alex Holland and Shane Nolan are players on the NC American Legion State Championship team. Alex Holland, a 2018 Topsail High graduate and current Catawba College player, is completing his second season with Post 10. Holland is a pitcher for the team. Shane Nolan, a 2019 Topsail baseball player and graduate, will play baseball at Pitt Community College next spring. Nolan, a versatile player and shortstop, has also been an outfielder for Post 10 this season.

With college classes beginning in the next few weeks, Holland and Nolan have some unfinished business. The Post 10 State Champion Team is competing in the Mid-Atlantic Regional next week at Asheboro NC  for a bid to the American Legion World Series in a couple weeks. As they say in life to live one day at a time. For Holland  and Nolan it’s “one pitch” “one out”and “one game” at a time for the next few weeks. Enjoy the the experience gentlemen!! Good Luck to both of you and Post 10 baseball in the regional next week.