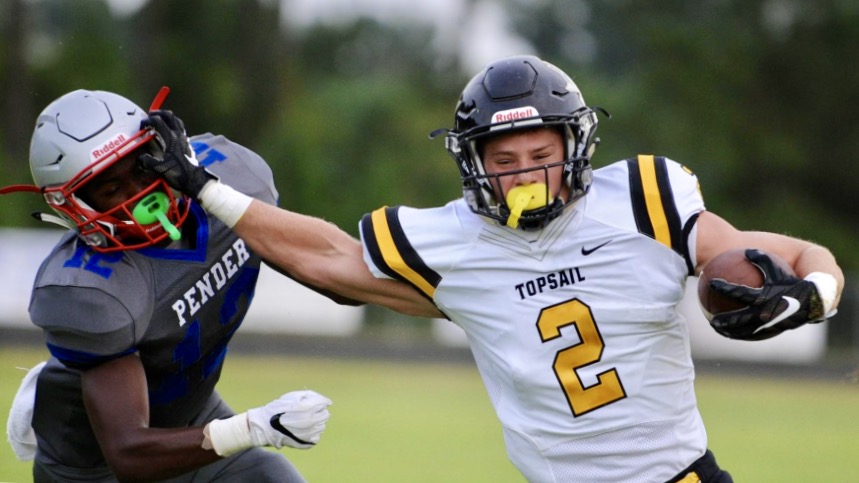 One of the biggest challenges for young athletes in all sports is the transition to the next level of competition. The move from that youth recreation league team to middle school competition where the players are older, more mature and stronger. The everyone plays rules are gone, as you will have to earn your playing time on the field or court.  The next challenging adjustment is entering the ninth grade and high school sports. Not only is it a step up in competition, you also as a ninth grader begin your four years of eligibility to participate in NCHSAA sports in high school. Academics and the the classroom first, combined with sports make you a student athlete.

Noah LaValle, a two sport student athlete and senior at Topsail High School, has met all of those challenges as he begins his final year of high school sports. LaValle has succeeded in the classroom as he currently has a 3.7 GPA as he enters his senior year.   LaValle has also been very successful with the Topsail Pirate Football team as a varsity starter since his freshman season.  Noah’s positions (All Purpose Back) on offense and (Strong Safety) on the defensive side of the ball.

LaValle has some very impressive stats in his three years on the team. LaValle, the Mid-Eastern 3A/4A Conference leading rusher in 2017 and 2018, has over 4000 total rushing yards heading into the the 2019 senior season.   His success has awarded him the 2018 County Player of the year and LaValle is a Mideastern 3A/4A All Conference selection in 2016,2017 and 2018.   Noah is also a member of the Topsail Pirate Wrestling team and competed in the NCHSAA State Championships in 2017.

Noah does not let his success on the field and mat keep him from realizing the team concept of sports. Without his teammates he would not have been successful. LaValle has intentions of playing college football after high school. For now, all he is focused on is one game at a time. Doing his best to help his team, the Topsail Pirate football team, be the best it can be. Everything else will fall in place.

Congrats!  Noah and Good Luck! to you, your team and your career after high school.