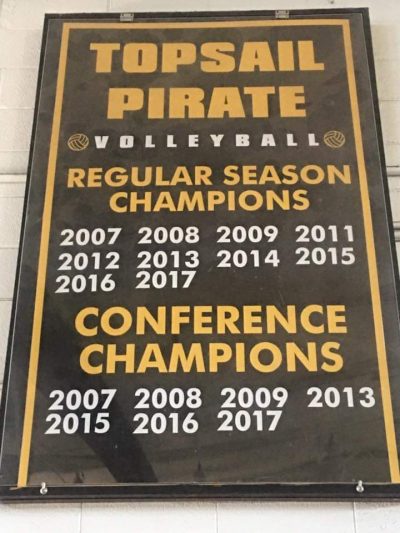 The 2019-20 school athletic season is officially underway. The Topsail Lady Pirate Volleyball team had a very productive summer,  the team competed in the summer league for the month of June. In July, the Lady Pirates attended a USA Volleyball Team Camp at Chapel Hill, NC. The Lady Pirates have a lot of experienced talent at all positions on the court.

Topsail head coach Hill Pearsall has a positive outlook for this years team. “I’m just ready to get the team on the court and see how they are gonna fair against other teams.” Coach Pearsall is pleased with the returning experience on the court this season. “A lot of returning strong servers, strong hitters, and good blockers. I think we are gonna have a really good season, a positive season.”

Topsail, one of the most successful programs in the area over the last 10 years, appears to be set for another great season.

The Lady Pirates compete in Mideastern 3A/4A Conference. The MEC is one of the top conferences in the state. Topsail in the 3A classification will compete for the 3A/4A conference title.

About the Author: Jakob Pearsall

Jakob is a Junior at Topsail High School and a cross country athlete. He is an interning journalist with Topsail Youth Sports Daily and enjoys working as a multi-media specialist. He has lived in Topsail his whole life and is looking to go into sports journalism as a career.