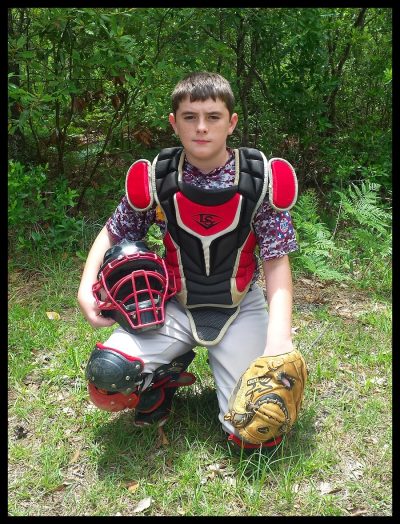 The National Anthem before sporting events, whether in the big leagues or youth league brings patriotism to sports. In the youth league  It is always great to see all athletes honor our country before games. In youth league events you often hear a recorded version of the “Star Spangled Banner”.

Things were a little different at the NC Dixie Youth 12u Baseball State Tournament last week in Clarkton NC. The fans at the tournament were treated to a special performance in the pregame ceremonies. Dixon 12u Allstars player Matthew Summers impressed the fans with a special performance with the singing of the National Anthem. Matthew performed from his teams dugout before the game. The performance received a well deserved applause at the conclusion from the fans.

Matthew’s mom, Amanda Summers, was very proud of her son, “Matty (Matthew) has been singing for several years” said Summers. “Matty joins myself and his two brothers as we sing at church events and youth camps. He did a great job.”

Matthew also has a love for the game of baseball. He has been a catcher since he was 9 years old and enjoys playing the position. Win or lose Matthew values good sportsmanship. In the state tournament he received a game ball for the character and leadership he showed behind the plate. He was more proud of the 12u Dixon Allstars as they were awarded the team Sportsmanship award for the state tournament. Congrats !!!